How To Thicken Refried Beans

Refried beans are a staple in every household across America. Sure, everybody’s Mama makes them differently, some like it spicy, some like it sweet, but however you have them, they’re always delicious. That is, until you’re served watery refried beans and you realize that some people really weren’t made to make refried beans like Mama. And do you know what makes it even worse?

That person serving watery refried beans could be you! In fact, we think it probably is since you’ve searched ‘How to thicken refried beans’ today and ended up here. But don’t worry, we have a HUGE amount of options for you, so no matter what you have in the house right now, you can rescue those refried beans and serve up the thick, creamy textured beans you love so much. Ready to get started? Grab your notepad and pen, turn your beans down to low, and get ready for a masterclass in thickening refried beans!

The first thing to do before you start messing around with adding different things to help thicken your refried beans is to just breathe. Leave your beans cooking, and just relax. Sometimes all your refried beans need is a little more time. The longer you cook them (with the lid off, of course) the more the liquid in the beans evaporates as steam, eventually reducing down that delicious stock you’ve created, thickening it up, and intensifying the flavors.

So often people panic when they see the liquid-y mess refried beans start out as, but actually, all they need is a little more cooking time to reduce down and lose some of that liquid. This is step one, but if that doesn’t look like it’s working, then it’s time to move on to the next step.

Cornstarch is every home cook’s secret weapon when they’re dealing with anything that needs to be thicker to be appetizing. But please, please, PLEASE, don’t fall into the trap of using too much. Too much, and the whole dish will just taste like cornstarch, and it’s really not nice to eat at all. A little goes a long way.

Most people recommend using 1 tablespoon of cornstarch for every cup of liquid used, but you might even get away with using a little less – but NEVER use more. You might be able to tell we’ve been burned by cornstarch before, and it really ruins a dish, so take our word for it and use it sparingly.

To use it, all you need to do is mix the amount of cornstarch you’re using in a bowl with a little bit of cold water at a time. Once the mixture becomes pourable, tip it into your refried beans, bring it to the boil, and allow to simmer. Make sure you stir in the cornstarch too. You want it to be spread evenly throughout the dish so those delicious beans mask the flavor. After a little while simmering, those beans should be nice and thick, and still delicious.

An alternative to cornstarch is to simply make your own roux. Yes, that’s a French term used in the French culinary arts, but really, it’s just flour and butter mixed and thrown into something to thicken it. The butter adds a little flavor to the dish, but the flour is pretty much undetectable, so it’s a great thing to use if, like us, you’re a little wary of cornstarch. And it’s so much simpler than people realize. Just because it’s French doesn’t mean it’s fancy.

So, leave your watery refried beans simmering away, and take out a small saucepan. Take equal parts butter and flour – to make thick refried beans you should use about 3 oz (or 85g) each of butter and all-purpose flour. Start by melting the butter in a saucepan. Once melted, slowly add in your flour, about a tablespoon at a time. Use a whisk to keep the roux moving around the pan as you do this. Sounds complicated, but trust us – a whisk in one hand and a tablespoon in another is not complicated at all. Just keep whisking away until all the butter and flour have combined into a roux.

Doing it steadily should mean you can take the roux off the heat pretty quickly after you’ve finished combining them all. You can cook out a roux for longer to create a nutty, brown roux which is great in sauces, but the longer you cook it, the less thick your refried beans will be by the time you add the roux in. You’re really looking for a pale yellow, paste-like substance for your refried beans. That’s your roux. Just take it straight off the heat and tip it into your refried beans, using your whisk to mix it through thoroughly. Then just simmer away, and they’ll be thick in no time.

Another great tip is to simply add extra beans. You already know that beans are thirsty for the delicious liquid you cook them in, that’s why they become soft and juicy and delicious in the first place. So it stands to reason that the more beans there are, the less liquid there will be, and the thicker your refried beans will become.

Of course, this method sort of relies on the fact that you have some extra beans just lying around that are ready to go. If you don’t, we’ve got some more alternatives below, but since you’re making refried beans anyway, it kind of makes sense just to add more beans, right? We should also say that this is the sort of fix

you’ll need to spot early on. If it’s looking as though you’ve made too much liquid, throw in your extra beans at the start and it’ll mean they all cook at a similar time so you don’t end up with slightly harder, or chalkier beans than the others.

Xanthan gum is a lot like cornstarch, in that it’ll save you from culinary disasters time and time again. If you’re reading this now and realize you don’t have any, then put it down on your grocery list for the next time you go shopping. Xanthan gum is your friend, and every home cook should have it in the back of their cupboard for when disaster strikes like today.

Xanthan gum is a little more science-y than cornstarch, so we won’t bore you with the details of how it works, instead we’ll give you the basic way to use it. It’s important to note it’s gluten-free though, which is great if you need to thicken anything at all and you’re on a gluten-free diet. So, here’s what to do.

Mix 1/2 teaspoon of Xanthan gum with 1 tablespoon of hot water for every 1 cup of liquid you need to thicken. A little more complicated than the cornstarch, huh? But still, if you know that you’ve used 4 cups of liquid in your refried beans, then you’ll need 2 teaspoons of Xanthan gum mixed into 4 tablespoons of hot water. Once that’s formed into a pourable liquid, pour it right into your refried beans and simmer whilst stirring constantly. After around 10 minutes, the Xanthan gum should be stirred through and your refried beans should be nice and thick. Simple, even if it is a little science experiment-y.

If you’re somebody who prefers a natural thickening agent, then instant potato puree is a great option for thickening your refried beans. Potato puree doesn’t suffer from the flavor problems that cornstarch, Xanthan gum, and roux sometimes do either, since potatoes are pretty much flavorless and take on whatever flavors are around them beautifully. That means you won’t upset that carefully balanced liquid, and you’ll still get a nice thick refried beans dish at the end of it.

Slowly does it with this, as the natural starch in potatoes can really get things thickening a lot faster than people realize. Add around a teaspoon at a time of instant potato puree. That’s because A) you can taste test as you go to make sure it’s not overpowering your refried beans and B) you can monitor just how thick you like it. Some people prefer their refried beans a little looser, some a little thicker, and instant potato puree is the best way to control the thickness of your beans, so they’re perfect for you.

This final tip is sort of the tip for next time. There’s nothing you can really do once you’ve started cooking your refried beans besides the tips we’ve already offered you today. But to avoid all of this in the future –

deciding between potato puree or Xanthan gum, whipping up a roux or just leaving it to cook out for longer – just use less liquid to begin with.

Yes, beans love liquid. It’s what they need to be surrounded by to become creamy and delicious, but too much and you’re just creating a watery mess. If you’ve been cooking refried beans from memory for a while, you might just want to check different recipes online to see on average how much liquid they’re using. You might find out that you’ve been drowning your beans for years, and a few pointers from other recipes might be all you need to set you back on track.

But right now, any of the other 6 points we’ve made today will help you thicken those refried beans so everyone can enjoy them. Next time, just remember to use a little less liquid. In cooking, practice makes perfect though, and it won’t be long until you’re a self-proclaimed refried beans master, serving them thick every time!

How To Fix Undercooked (Baked) Beans

How To Reheat A Cheesesteak (Without Drying It Out) 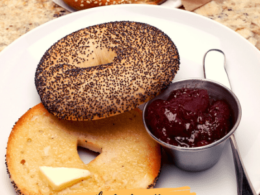 How To Toast Bagels In An Oven 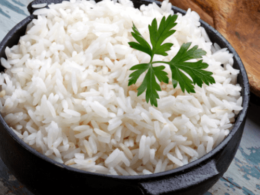 How to Cook Rice Without Getting It Sticky and Fluffy 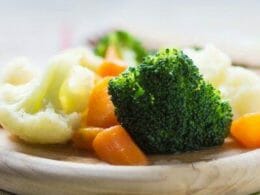 7 Brilliant Ways on How Do You ADD Flavor to Steamed Vegetables?

Can You Refreeze Shrimp?