How To Fix Undercooked (Baked) Beans

But what happens when those beans aren’t perfectly cooked? Well, that’s pretty frustrating considering all the effort you’ve put in until now, right? Of course it is! So today, we’ll tell you how to fix those undercooked baked beans so you can enjoy them as they should be!

How To Know If Beans Are Undercooked

This is actually more difficult than you’d think. Yes, hard beans are a sign that they aren’t cooked, but they’re also a sign that your beans have been kept dried for a long period. This doesn’t mean they are unsafe to eat, but just that they’ll need longer to become soft. Remember, when cooking beans, you’re looking for them to soften but not become mushy. If they do, then they’re overcooked.

The best way to check is to just take a few and press them against the side of the pot as they’re cooking. If they give way easily, then they’re cooked. If they don’t, leave them a little longer.

Why is it important to know if the beans are undercooked?

How To Fix Undercooked Baked Beans

Fixing your undercooked baked beans should be done before you bake them in the oven with the other flavors you’re planning on adding to the dish. That’s the best way to guarantee they’re fully cooked. And here are all the ways we know to fix undercooked baked beans. So try all (or some) of them to get your beans oven ready!

This first trick is really the best way to determine whether or not your beans are undercooked, or just a little harder because they’ve been dried for so long. You see, hard beans which are actually cooked but just need more help softening is easy to fix. Use 1/4 teaspoon of baking soda for every pound of beans you’ve used.

By stirring in some baking soda, you actually help break down the hardness of the beans. The ‘hardness’ is because of something called pectin, which can be broken down by baking soda to help bring out the tenderness in the beans. If, after using this trick, the beans are still hard, then it’s because they are undercooked and need some more time to soften and cook thoroughly. So move on to the next tips to find out what to do.

By Soaking Them Longer In Salted Water

Now we know the beans are definitely undercooked, it’s time to go back to the drawing board. If you’ve already soaked them overnight the night before, then you’ve got a head start, but you’ll still need to soak them for longer in salted water. 2 tablespoons of salt in the water will help break down the pectin some more and soften the beans so they’re ready for cooking.

There’s no telling how long you’ll need to soak the beans for, but in total they can take up to 20 hours to soften, especially if old. If you were planning on making beans for dinner tonight, you might want to mix up your meal plan a little. But remember this soaking tip for next time, because it’ll help you get them perfect first time.

By Cooking Them For Longer

We might be stating the obvious here, but sometimes your beans just need a little more time in some boiling water. Sometimes that’s all the ‘fix’ your undercooked beans need. The longer they are cooked, the more easily the pectin breaks down, and the softer your beans will be. Cooking for long periods helps to ensure the lectin we spoke about earlier is gone too, meaning your beans are 100% safe to eat.

In total, beans can take 2 hours and over to cook thoroughly before they’re ready for baking. That’s why making baked beans is always best when you’ve got plenty of time to dedicate to them. You’ll also need to monitor the beans as they cook to make sure the water doesn’t evaporate and the beans don’t burn.

By Using A Pressure Cooker

soaking them anyway, because it makes them much more digestible if you know what we mean: *cough* gas *cough*).

A pressure cooker can have your beans softened, thoroughly cooked, and ready for the oven for baking in as little as 10-20 minutes. That’s right, no more waiting around for your beans to soften and pushing dinner back until midnight. A pressure cooker is brilliant because it just intensifies the cooking process and gets everything ready rapidly. It’s perfectly safe and saves you so much time! Seriously, if you like making baked beans, then this is a game changer!

We don’t mean cooking the dried beans in a steamer – that’s not possible. Well, it is possible, but it’s really not practical. It takes so long for beans to be fully cooked when surrounded by boiling water, so imagine how much longer it will take to cook them with just steam. It’s not really worth the extra effort.

However, you can use steam to your advantage alongside boiling water. First, add your beans and boiling water to an oven safe pot, and set your oven to a high temperature. Once the oven is preheated, put the boiling water and beans into the oven. This helps to create a steam oven effect. The beans are being softened by the boiling water, and the steam in the oven is helping them soften much quicker, too.

It’s also a less harsh way of cooking beans before baking them and helps prevent them from becoming overcooked and mushy. This method is also the best way to ensure your beans are still packed full of those healthy nutrients, because overboiling them can make them lose some of their goodness.

By Cooking Them Again

This note is really for those people who have tried cooking the beans longer, but to no avail. By the time you’ve boiled them for 2 hours, they’re probably cooked, but if they’re still hard, then you’ll need to cook them again. Dried beans can be kept for years, so it’s no surprise that they need longer to cook.

Consider mixing up your cooking method, though. If the beans are still hard after ages in boiling water, then transfer it to a pot and try the steaming method we talked about above. If you’ve tried the steaming method and that’s not worked, try the boiling method or the pressure cooker instead. Twice cooked beans are definitely not going to be undercooked, and mixing up the method might help you get the softness out of the beans that you’ve been looking for.

You might think this tip is just us telling you the flavors we like in our baked beans, but trust us, it isn’t just that… When beans are slightly undercooked (that means, still safe to eat, but not quite perfect) then bay

leaves and garlic can help cover up a multitude of sins. Bay leaves are wonderful for adding a background flavor that enhances all other flavors in a dish. But more than that, they’re great for digestion.

Earlier, we hinted that undercooked and under-soaked beans can cause gassiness. And they can. But bay leaves actually combat those effects by helping with digestion, so you don’t have to deal with any unwanted side effects…

And garlic, whilst obviously delicious and great in any dish, actually contains phytonutrient allicin. ‘Phytonutrient allicin’ wasn’t quite the bombshell moment for most of you readers, huh? No matter. Basically, that science-y word contains sulfur, which is great for digestion too. So by adding garlic and bay leaves, you’re able to make your beans tastier and easier to digest! Perfect!

Nailing baked beans on your first attempt would be seriously impressive, so don’t beat yourself up about undercooked baked beans. Instead, remember to soak in salted water for longer next time, use the baking soda trick for old dried beans, and consider mixing up your cooking method to find something that works for you.

Once you’ve found your own method of cooking baked beans perfectly, you’ll not need our how to fix undercooked baked beans guide. So go forth our proteges, fix those baked beans, and we hope to never see you at this specific guide again!

How To Drain Kidney Beans

How To Thicken Refried Beans 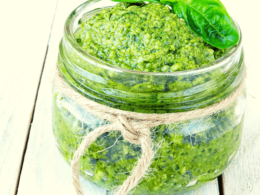 How to Make to Perfect Homemade Pesto Sauce 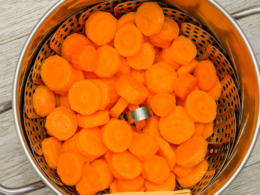 The 4 Ways on How to Soften Carrots 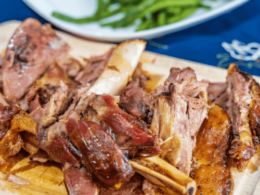 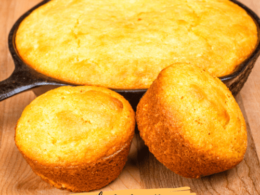