How to Cook Large Quantities Of Bacon? Guide + Tips

As the saying goes, everything goes better with bacon. But how to cook large quantities of bacon? Large-group gatherings are not the exception. Bacon goes with everything, especially summer appetizers, finger foods, and backyard BBQs. Bacon-wrapped scallops anyone? Want to add bacon to that burger? Side of bacon with your omelette? The answer to all of those questions is unquestionably: OF COURSE.

That leads us to today’s question: how to cook large quantities of bacon?

There’s in my opinion just one problem: cooking bacon the traditional way is time consuming. Unless you have access to a spacious plancha, preparing griddled bacon for a crowd is just not practical. The flipping and constant tending to the delicious fatty heaven bites is a chore.

The ultimate crowd-pleaser does not have to be difficult. In fact, with my method, it becomes downright easy without having to sacrifice quality. It just might take a little practice and knowledge of your product.

When it comes to cooking bacon, I use the oven almost every time. Using the oven cuts down on the need for flipping and creates great looking and tasting bacon. The dry oven heat gives a nice crispness and even cooking. Plus, the bacon remains in a perfectly-shaped strip throughout the cooking process, with a wave of curls along both long edges.

The supermarket bacon competition has heated up over the last few years. Your classic bacon purveyors (Oscar Meyer, Hormel, Hatfield, etc.) have introduced bacon products in different cuts and flavors. “Thick cut” is a term you see quite frequently in the bacon case. This product will feature meatier strips that will take longer to cook, but you’ll get less strips in each package.

Applewood smoked, hickory, and maple are three examples of different flavors of bacon you’ll find in the average supermarket. Applewood and hickory indicate wood used in the process to which the bacon was previously smoked. Maple flavoring is typically infused into the meat after being smoked. I like to steer clear of the maple flavored bacon as it tends to taste a little fake to me.

The supermarket isn’t the only place to buy your bacon. Speciality markets and butcher shops tend to have bacon that is just better. I have a local independent smokehouse near me that serves up some of the best bacon I’ve ever had. They cut it thicker than any product I’ve found in the grocery store and always season the edges with something interesting. They make a cracked pepper bacon that is out of this world!

So, how to cook larges amount of bacon?

Upon taking the bacon out of its package, it is important to inspect. The first thing you want to look for is thickness. The classic Oscar Meyer bacon will be thin, almost translucent, whereas it’s thick cut counterpart will have a meatier feel. Naturally, the thicker the bacon, the longer it will cook.

Once you have your perfect arches, transfer the bacon to a plate lined with a paper towel. The paper towel will catch some of the excess grease so the bacon doesn’t make you or your guests feel worse after eating.

Your mornings will be full of happy, bacon-filled greetings. It’s not that hard to cook lots of bacon at once if you have the right kitchen tools! Here are some tools we recommend:

Not all bacon is made the same. If you happened to get your bacon at a butcher and it doesn’t have cooking instructions, ask them how to cook it best – they will certainly know. Butchers are the best resources for cooking tips. With cooking as a trial-and-error skill, butchers have enough product to trial their meats often.

Some folks like a bit of sweetness to their bacon, which is why you see maple flavoring in several bacon products. I like brown sugar with mine. After lining up your strips on the cookie sheet, try lightly crumbling some brown sugar over the top. It’s robust sweetness holds up well to the rich saltiness of the bacon.

Bacon is obviously a crowd-pleaser. With this easy method, you can be sharing bacon with your party in no time. It features an easy clean up and near-perfect results every time.

As always, try it out a few times to get your method down pat. Ovens can be different and impact the process. Humidity, quality cookie sheet, and brand of tin foil can also change the times and temps needed for great bacon. Simply use the method above as a guideline and make it your own!

25 Foods That Are Healthy and Taste Good

How Long Should Vegetables Be Cooked? 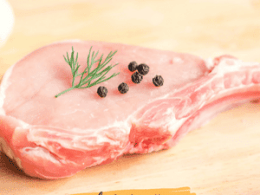 The best way To Use Pork Chops For Pulled Pork 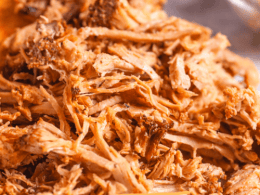 How to Keep Pulled Pork Moist and Juicy

What’s The Best Cheese for Tacos?