Can You Overcook Ribs?

Better than the BBQ: Cooking Ribs in the Oven. But, Can you overcook ribs?

Can you overcook ribs? With summer fast approaching, the smell of BBQs is beginning to fill the air.

But there’s one lip-smackingly delicious item that’s fallen into decline over the past few years: BBQ pork ribs.

Sure, you can still find succulent racks of ribs at professional BBQ establishments, but for the humble home chef, throwing a rack of ribs onto the grill can be a daunt- ing and time consuming process.

Whilst we totally understand why many budding grill chefs plump for more simple BBQ fare, it’s a crying shame that many are scared at the prospect of tackling a rack of delicious ribs.

With that in mind, here’s a quick guide to cooking ribs the easy way, and getting these meaty, mouth-watering morsels back on the menu.

If you’re used to quick and easy BBQ basics like burgers or sausages, cooking ribs can come with a bit of a learning curve:

Perfect, melt in the mouth ribs need low and slow cooking, to achieve this, your BBQ requires some pretty specific features:

Even if you have a high-end BBQ with those features, you’re going to need to keep a watchful eye on the ribs as they slow cook to make sure the temperature and hu- midity are exactly on point. If you get this wrong, your rack of ribs will emerge from the BBQ overcooked and resembling an old leather boot.

There’s no two ways about it: Cooking ribs on a BBQ is inefficient and difficult.

Cooking Ribs in a Convection Oven

OK, so you really want to serve ribs at your next BBQ party, and you’ve decided that your BBQ isn’t up to the task. So how are you going to pull this off?

Simple: Use your standard kitchen convection oven and get the ribs cooking a good few hours before your guests arrive.

The best part? Cooking ribs in a regular oven is simple. It’s also a set-and-forget process that you can leave unattended whilst you prepare the rest of your BBQ food.

The Super Easy Method for Cooking Ribs in the Oven:

Can You Overcook Ribs in the Oven?

If you’re able to set your oven at a low enough temperature, it’s not really possible to overcook your ribs. The trick to the slow cooking process is to keep a low but consistent heat, and make doubly sure that the foil parcel containing your ribs is properly sealed. That way, the apple juice or stock added into the pouch effectively steams the ribs, keeping them succulent and tender, and locking in the moisture.

Tip: Don’t be tempted to pierce the foil pouch to check on the progress of your ribs. You ned to keep the moisture locked in to prevent them overcook- ing.

After a long slow cook in the oven, your ribs should emerge from their foil pouch tender, moist, and almost flaking from the bone.

At this point, all you need to do is finish them off on the BBQ for a few minutes to give them an authentic, charred, smokey flavor:

Still Great Without the BBQ!

Even if you’re not planning a BBQ party, this method of cooking ribs is great for any occasion: Simply replace the final BBQ step with a few minutes under a hot oven grill until the sauce coating is nicely browned.

Now you have the basic cooking method for tender, mouthwatering ribs, it’s time to discuss flavorings.

The dry rub for your ribs forms a “base flavor”. The one we’re using is a classic Southern USA style rub, that blends sweetness, acidity, a little chili kick and a deep red hue. Once you’ve attempted this recipe a few times, it becomes easy to substitute spices to give radically different flavors:

Ready to use dry rubs

The more sugar and soy sauce you add, the faster the ribs will caramelize and char when they get hot on the BBQ or under the grill. That means you’re going to want to carefully monitor your ribs during the final stages of cooking to prevent over- cooking.

If you own a slow cooker (or an Instant Pot with a slow cook function) this could be a great alternative to cooking your ribs in a regular oven. The biggest challenge when using a slow cooker for ribs is that they rarely fit prop- erly into the round pot. This can be remedied by cutting the ribs into smaller serving-sized portions and then piling them into the pot along with the apple juice marinade.

As far as cooking times go, slow cookers are even more forgiving than convection ovens, so it’s virtually impossible to overcook your ribs: Simply let them bubble away on a low setting for around 8 hours and check periodically. Once you’re finished, baste with BBQ sauce and grill in the same way mentioned previously.

Sticky, slow cooked ribs are a mouthwatering centre piece for a summer BBQ party. Using an oven to cook your ribs low and slow practically guarantees great results, and helps to relieve some stress for the busy BBQ chef!

What Is the Ideal Temperature for Smoking Fish?

How Do I Start Cooking at Home? 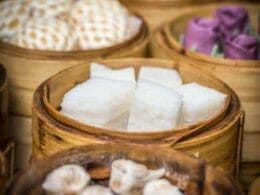 How Can You Steam Food Without a Steamer? 4 Easy to Use Tips. 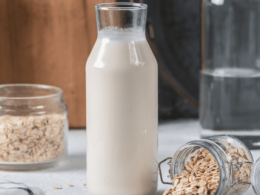 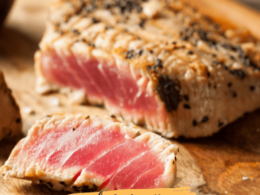 How To Pan Sear A Tuna Steak 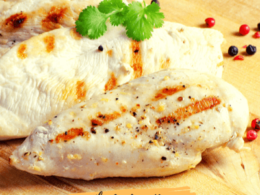