Look, it happens to all of us, it’s only that it happens more often when we’re baking cornbread instead of other goodies. And again, it just happens with a baked good that can’t be covered in frosting to hide small imperfections.

And it’s not just about imperfections – I don’t want to lose half of my cornbread to the pan, do you? If you’re of the same mind as me, read on. We’ll talk pans, recipes, and everything else that can help us prevent cornbread from sticking.

Prevent cornbread from sticking to a baking pan

There are no two ways about it, you have to butter and flout that pan. Just like when you’re baking a cake, if you want to release cornbread from a regular baking pan, you’ll have to do it this way.

The good news is that you don’t have to use actual butter, neither do you have to use flour as well. You can soak some kitchen tissue with plain vegetable oil and wipe it all over the pan. If it’s square or rectangle-shaped, make sure you get those corners well.

And to replace flour. you can use cornflour or cornmeal. This will also produce a crispier crust, especially if you use the type of cornmeal you’d use to make polenta.

Prevent cornbread from sticking to a cast iron pan

If your pan is seasoned properly, and if you didn’t destroy that seasoning with washing or acidic foods, you will not have to do anything.

You could add some parchment paper at the bottom as an insurance policy. However, a properly seasoned pan should be able to do without.

Another way to prevent cornbread from sticking to a cast iron pan is to preheat it. This works great with very liquidy batters since it will cook the bottom straight away and create a solid crust that won’t stick (usually).

To line or not to line

Lining your pans will certainly help the cornbread pop right out without sticking, but it will soften the crust. It’s enough to do it at the bottom, so you are at least left with crispy sides.

Standard issue parchment paper will do the trick, but you can also invest in a few sheets of silicone liners. Though, keep in mind that the cornbread will be a bit more on the cakey side when baked on silicone.

Best pans to use when baking cornbread

My personal favorite is cast iron. When it’s properly seasoned, there’s no way anything will stick to it. The older the pan is, the better it gets. Plus, if I made something very fatty and aromatic in the pan just before, some of that aroma will linger and get into the cornbread.

An enameled cast-iron pan is an even better choice, especially since you never have to worry about the seasoning. However, you have to be careful about the tools you’re using to get that cornbread out so you don’t chip the enamel.

In terms of classic baking dishes, plain aluminum bakeware is fine as long as you butter and flour it properly. And it’s also more likely to create a nice crust (when compared to silicone and glass). It’s even better if you have carbon steel because you can season it just the way you would season cast iron.

Speaking of carbon steel, a pan made out of will work as well. It’s basically the same situation as with the cast iron pan, it’s just thinner, lighter, and heats up quicker.

How do you get cornbread unstuck?

Pray that you have been good enough and that Santa works miracles out of season. Or try one of these.

Turn the pan upside down.

Gravity is your best friend at times. Turn the pan out on a cooling rack or a kitchen towel and leave it be.

However, this is not the best idea if your cornbread recipe is super soft. And if it’s burnt, the bottom’s staying stuck to the pan anyway.

Use a butter knife or a silicone scraper.

Start by gently scraping the sides of the pan. Then slowly try to lif the bottom corners, and work around and deeper until you feel it loosening.

If the cornbread starts separating when you try and lift it, you may need to move to the next step. Chances are, you’re not getting it out in one piece.

Sometimes, there’s just no helping it. You may need to kiss your beautiful presentation goodbye and just concentrate on getting the cornbread to the table.

Use a silicone dough cutter/scraper (so you don’t damage the pan) and cut into the desired size. Then, use the same cutter/scraper, offset spatula, or a butter knife to coax the pieces out.

If it’s in a cast iron pan, don’t bother.

Instead, pick your prettiest dish towel and a wooden board of sorts, and turn it into an Instagram-worthy display.

Does the recipe matter?

Yes, it does. Some recipes are naturally sticky and clingy, and some just cling to particular types of pan.

I learned this the hard way when I started making cornbread with pureed corn in it. Oh, it’s super delicious and you should definitely try it at least once (it’s so good you’ll do it the second, and the third, and thousandth time). I use Michael Ruhlman’s muffin ratio (2 parts flour, 2 parts liquid, 1 part egg, 1 part fat, 1 part sugar. by weight), but I substitute sugar for steamed corn puree. This produces the most amazing, silky, rich-tasting cornbread, but it’s also a very liquidy batter that bakes into a tender crumb AND crust. In short, it falls apart if I don’t handle it well.

If I were to chuck out the corn puree and leave everything as it is (in this case 1 part fine cornmeal or cornflour, 1 part all-purpose flour, 2 parts buttermilk, 1 part egg, 1 part oil, by weight), I still end up with a soft cornbread, but it has a firmer crust and it releases from the pan with ease.

If baking ratios are giving you a headache, this all means that the softer the cornbread, the more likely it is to stick and/or fall apart when you try to get it out.

But that also doesn’t mean that a dry cornbread pops out with no objections. These guys are just as likely to stick, even if the bird’s eye view shows that the cornbread shrunk and separated from the pan.

So, should you toss out your favorite recipe in favor of one that doesn’t stick? Not at all. Just keep in mind that you will have to adapt the prep method to the recipe and the pan you’re using, and maybe even have to experiment to find what works for you.

Should you let cornbread cool before removing it from the pan?

Just enough to handle (about 10 to 15 minutes). With almost all baked goods, you want to remove them as soon as you can and cool them outside of a pan. If you leave them inside, you’ll end up with a soggy crust everywhere but the very top.

But then again, if you are baking the cornbread in a cast iron pan, you don’t have to remove it all. So leave it inside until it’s time to retrieve and wash the pan, and pack the leftovers away.

Step by step, let’s prevent cornbread from sticking to any pan

Okay, time to put everything into practice.

Take a moment and think about what usually causes you headaches. Is the cornbread sticking to the bottom, or the sides as well? Do you usually lose a few tiny pieces or whole chunks?

Just a few seconds thinking about it may tell you if you simply need to add parchment paper, preheat the cast iron pan, or change the way you prep those pans altogether.

This step has mostly to do with your cast iron pan. Even before thinking of making cornbread, make sure that the pan is seasoned properly.

Try to avoid cooking anything with tomatoes or other acidic foods just before. You could also skip desserts like Tarte Tatin, just in case.

If you’re still sticking with the cast iron (or with carbon steel), we can sneak in a last seasoning session Though, this means that you are preheating your pan. Add any neutral-tasting oil to the pan (plain veggie is fine) and spread it in a thin layer. Put a pan on a hob or in the oven and let it all preheat together.

If you are using a regular pan, start by making sure it’s dry and there’s not even a droplet of water in it. Take some butter, vegetable oil, or cooking spray, and coat all sides and the bottom evenly. Make sure that you also catch any corners. Add a generous amount of flour or cornflour to the pan and shake to coat everything. Then turn upside down and bang on the table or counter to remove the excess.

If using parchment paper or silicone liners, add it to the bottom right after buttering. YOu can skip the flour part.

I didn’t cover this in detail, but your cornbread could be sticking because it’s burnt. I know, I’ve just invented the wheel.

To prevent this from happening to not only your cornbread but everything else you’re baking, make sure that you’re always using appropriate pan sizes and matching them to correct time and temp.

Also, keep an eye on your oven. Not just at what your cornbread is doing, but how’s your oven behaving in general. Get an oven thermometer and check if you’re actually baking at the correct temperature or the oven is running hot or cool.

Step 5 – Cooling instructions are there for a reason.

Wait at least 10 minutes before trying to turn out the cornbread. Right out of the oven, it’s still too soft to handle and it will fall apart in an instant. Plus, it’s roughly at the temperature of boiling water, and if it lands on you it can turn into a trip to the emergency room.

How to keep cornbread muffins from sticking to a pan

Now that your hopes and dreams are properly squashed, let’s talk about pans. What is your muffin pan made out from? Obviously, silicone won’t be a problem. You’ll get a softer crust, but at least the cornbread muffin will pop right out with minimal coaxing.

Stone and ceramic pans are similarly cooperative. Though some of them don’t do much to create a perfect crust either, they are still an investment you should consider making if you are serious about your muffins.

If you have regular muffin pans that are not coated with anything, you can make them nonstick with seasoning. Uncoated pans are usually carbon steel or aluminum, and you can season both the same way you would season cast iron.

All that being said, you’ll have to get some cooking spray and parchment paper. Regular cooking spray (no need for the one that has flour in it), will be more than enough to ensure that the sides don’t stick. However, the bottoms can go either way, so it’s better to take out an insurance policy in form of a lining.

Cut out small parchment paper disks and place them into the muffin pan after spraying with cooking spray. It’s an annoying job so consider getting your hands on a reusable silicone lining sheet and cutting it out to fit your pan. Do it once, and you’ll never have to think about it again.

5 Ways on How Do You Keep Burritos Warm. 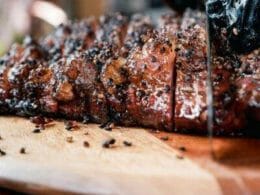 What Are the Best Cuts Of Beef for Smoking? Complete Guide. 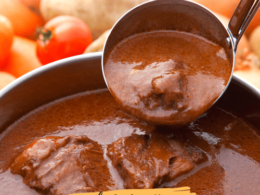 Can You Freeze Cottage Cheese? 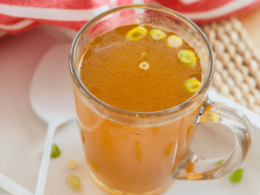