How to Thaw Cool Whip

Everybody loves Cool Whip. The product is light, fluffy, and delicious, but there’s one major drawback – it comes frozen!

How are you supposed to top your piece of pumpkin pie with frozen Cool Whip? It can’t be done!

Don’t worry, though – you can thaw frozen Cool Whip in no time.

Whether you need it done in three minutes or three days, you can successfully thaw frozen whipped cream when needed.

How To Thaw Cool Whip

Did you know there are four great ways to thaw a container of Cool Whip? With so many different methods, you can quickly get your hands on that “golden cream” in no time.

1. Thaw in the Microwave (Fastest Method)

The easiest way to defrost Cool Whip fast is to chuck it into the microwave.

Simply place the entire container – without the lid – into the microwave. Heat in 30-second intervals. Mix the Cool Whip each time until it’s completely melted (three minutes max).

Be careful not to leave the Cool Whip in the microwave for too long or risk ruining it.

It is imperative to stir the cream every 30 seconds. If you don’t, you can end up with uneven thawing, which can ruin the overall texture and taste.

2. Thaw in a Bowl of Cold Water

The next best way to thaw Cool Whip is the cold water method.

Place the frozen whipped cream into a medium-sized bowl. Add cold water until it is fully submerged. Let it soak for about 30 minutes before checking to see if it’s fully defrosted.

You can speed up the process ever-so-slightly by performing cold water run instead. To do this, simply keep cold water running continuously over the container of Cool Whip.

Note: Do NOT use warm water to thaw your Cool Whip. Cool Whip contains dairy that should not get warmed up. Always use cool water!

3. Thaw on the Counter

One of the most popular (and simplest) methods is to thaw Cool Whip on the counter.

Defrosting Cool Whip on the counter needs no explanation.

When you get home from your trip to the local grocery stores, simply place the Cool Whip on your kitchen countertop at room temperature for one hour, stir, and enjoy.

Don’t leave it at room temperature for longer than two hours, though. Remember – Cool Whip contains dairy products that will go bad after a few hours.

You don’t want to consume Cool Whip that’s been sitting out for longer than this timeframe.

Not only will it lose its desirable fluffy texture, but it likely won’t taste that great. It may even make you ill at some point, just like other topping creams made with dairy.

4. Thaw Overnight in the Fridge

Yes, you can freeze whipped cream, and that’s precisely why Cool Whip is sold frozen.

If you’re in no rush to defrost Cool Whip, you can use the final method: let it thaw in the refrigerator overnight.

To do this, simply place the entire Cool Whip container in the refrigerator. Thawing Cool Whip will take anywhere from 4 to 24 hours.

This isn’t the go-to method if you want to defrost Cool Whip quickly, but the traditional approach will work like a charm.

How Long Does It Take Cool Whip to Thaw?

How long your Cool Whips take to thaw depends mainly on which method you use. Let’s take a closer look:

Why Is My Cool Whip Runny After Thawing?

Your container of Cool Whip can turn into a runny mess if you engage in incorrect defrosting techniques.

That is why it is vital to perform these methods correctly. You also need to keep a close eye on when your Cool Whip is, in fact, fully thawed.

If you leave the whipping cream in the microwave or at room temperature for too long, you may end up ruining it.

A ruined whipped cream will have a runny texture that is not safe to consume. Do not try to put it in the freezer overnight and use it again. You could end up sick.

Can Thawed Cool Whip Be Refrozen?

Did you thaw your Cool Whip topping cream but didn’t use it all? You can refreeze it as long as it hasn’t been left out for longer than two total hours at room temperature.

There is a reason you are supposed to freeze whipped cream Cool Whip – it will remain at its peak of freshness for longer.

But don’t worry – whether you thawed the Cool Whip in the microwave, left it on the counter, or placed it in a bowl of cold water, you can always refreeze it for another day.

Can You Cook Fish in a Microwave? 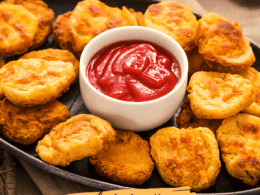 How to Cook Chicken Nuggets Without a Deep Fryer

Is Baking Hard to Learn? 5 Easy Steps to Start As a Complete Beginner.

How To Store Oyster Mushrooms