How to Make Home-made Sushi: Step-by-step

Whether it’s in the form of a roll, a bowl, or even a burrito, sushi is everywhere these days. It’s always been a popular type of cuisine, but it’s also an extremely adaptable food. As new variations continue to pop up across major foodie cities around the world, I have a feeling sushi will be around for a very long time. In this guide, we’ll go over how sushi first got its start and how it became the foodie phenomenon it is today, as well as how to make your very own sushi from home.

Nowadays, you will find sushi in both fast-paced casual dining restaurants and exquisite fine dining restaurants. As western influences adopted the dish, they shifted the face of sushi in the modern world and gave it new meaning.

Fusion concoctions are extremely popular, especially in the United States, and you’ll find everything from traditional sushi rolls to sushi burritos and even sushi burgers with rice for buns. Sushi is constantly evolving and will continue to evolve and be given new life. A dish that is thousands of years old, sushi is not going to disappear any time soon.

How to Cook Sushi Rice at Home

If you would prefer to buy pre-cooked sushi rice that’s perfectly fine, but cooking sushi rice at home is fairly easy. The best rice to use for sushi rice is medium-grain California rice or short-grain Japonica rice.

To store your sushi rice, simply cover the top of the bowl with a damp towel and store it on the counter for up to 12 hours.

How to Make Sushi: Step-by-Step

In order to make sushi at home, you’ll need the following ingredients:

If you have a bamboo mat, great! If not, a cutting board will work as well. Lay out your nori sheet on top of whatever you’re using and make sure the rough side is facing up.

Use a spoon or your fingers to carefully spread the rice out evenly across the nori. If using your fingers, you’ll want to wet them first so that the rice doesn’t stick to your hands.

Whether you’re using thin slices of fish, avocado, cucumber, carrots, or whatever your heart desires, now is the time to add your fillings on top of the rice. Make sure to leave the last quarter of the nori sheet empty to make for easier rolling.

If using a bamboo mat, you’ll want to fold it over your sushi into the shape of a roll and then tighten it before releasing the bamboo mat to compress your ingredients. Then, using your fingers, you’ll tightly roll the sushi the rest of the way until you have your roll. At this point, if you wish to cut it into pieces you can do so carefully, using a sharp knife.

When ordering sushi, it’s important to know the various types that you could possibly get. Many people think of maki when they think of a traditional sushi roll, but there are actually five main types of sushi to be aware of. Let’s go over each one:

Maki is known as the classic form of sushi and consists of rice, fish, and typically vegetables wrapped in seaweed.

Uramaki is similar to maki, with the key difference being that the seaweed is wrapped around the inside and the rice is on the outside.

Temaki, also known as the hand roll, is sushi that has been wrapped into the shape of a cone. These rolls are meant to be eaten by one, as they aren’t cut into individual pieces and are therefore more difficult to share, but are still delicious!

Nigiri consists of a fish that is usually, but not always, raw sitting atop a small mound of sushi rice. The topping doesn’t technically have to be fish to be considered nigiri, so many vegans have taken it upon themselves to use tofu or vegetables instead.

The oldest form of sushi that exists, sashimi consists of nothing but the fish. With no rice, vegetables, or seaweed involved, this type of sushi allows the flavor of the fresh fish to shine through on its own.

How to Properly Store Sushi

The best way to store sushi is by ringing out any liquid that may be in the roll and then wrapping it in plastic wrap until it’s tight enough that no air can get into it. Once wrapped, you’ll want to put your sushi into an airtight container before placing it in the fridge.

If your sushi roll contains raw fish, it should be consumed within 24 hours of making it, as raw fish goes bad quickly. If your sushi roll is made with cooked fish, like a California roll for example, you can store it in the fridge for up to 3 days before eating it.

Be cognizant of the way your sushi looks and smells before storing it. If it looks or smells any different when you’re ready to eat it, it should probably be tossed out. Prepared sushi can be frozen, but freezing it will alter the taste and texture and is not recommended. If possible, you should try to eat it when it’s fresh for the best results.

As long as it’s eaten in moderation, sushi is a delicious and healthy dish. With vegetables that are rich in vitamins and minerals and fish that is loaded with omega-3s, it’s a perfectly healthy snack or meal. If you want to try making your own sushi at home, here are some recipes to get you started:

How to Make the Perfect Dripping Cake!

How To Cook Chicken in Air Fryer 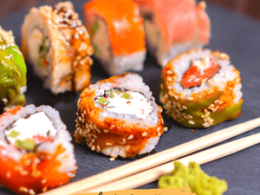 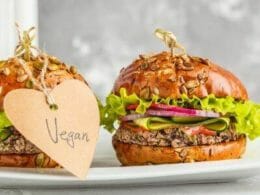